I’m a fan of Red Sox baseball. I travel from New York to Boston to see a few games a year. I grew up in a Red Sox Baseball household. What I’m getting at is that I love almost everything about my precious team. What I don’t love (and by don’t love, I mean HATE) is Fenway Park.

I hate having bruises on my knees from the closeness of the rows. I hate having a stiff neck because the seat is not actually pointing toward the infield. I hate getting excessive physical contact from the person next to me because we both don’t fit in to the not wide enough seats. I hate that the park is so small that even though I wake early and spend almost 8 hours online, I’m only able to get scattered single seats with obstructed views. I hate that it’s impossible to get from one side of the park to the other because the only way to do this is the third base concourse. That concourse is more crowded that Paris Hilton’s bedroom and smaller than her brain. And I hate anyone who is too in love with the park to see the benefits of a new one.

All this hate can be erased with a plan for a new park, but that’s not likely. How unlikely? A new Red Sox ballpark will probably not happen during my lifetime. This is what CEO Larry Lucchino said:

Gah! Well, I guess now that I live in New York City, and the Mets have a new stadium, I should go check those guys out. I hear they have this familiar ability to do well and then fail in the end that I grew up with. 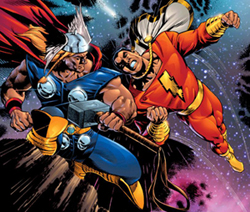 Well, Thor and his dog, Bruin, have now hit the big time: They went to the All-Star Game. No he wasn’t selected to the team; he was out in a kayak in McCovey Cove as a player-commentator for FOX (insert stupid robot sounds here). So Thor like to ham it up and be on TV. Another example of this is this short video clip: END_OF_DOCUMENT_TOKEN_TO_BE_REPLACED END_OF_DOCUMENT_TOKEN_TO_BE_REPLACED

And Other Unpopular Suggestions

Short one today, but I want some feedback: why doesn’t Boston build a new ballpark for the Red Sox?

First, some economics: let’s say an average Red Sox seat retails for $501. In practice, most of those tickets are scooped up by scalpers, who resell them for $100 and up. If I’m Theo Epstein, then every penny between the original $50 price and the final $100 price is a penny that I could have captured. This steams my britches.

Should I raise ticket prices across the board? Not necessarily. Baseball tickets are a luxury good, so they tend to have a higher demand elasticity. This means that people are more sensitive to changes in price than with other goods. Cigarettes and gasoline have very inelastic demand, by way of contrast: you can raise the price by 10 or 25 or 50 cents and people won’t buy less of it2. But no one needs loge seats. And a ticket that might have looked perfect at $40 might suddenly seem too expensive at $50. Yes, it’s only another $10, but people are weird.

Further, the Red Sox have been raising ticket prices pretty regularly for years and the problem remains. Scalpers buy up as many tickets as possible, resell them for half again as much, and pocket the difference. It seems pretty clear that the issue with the Red Sox is fundamental: demand outstrips supply.

Fenway Park is the oldest baseball stadium still in operation. It seats 38,805 and is pretty rickety. While other stadiums have fewer available seats (PNC Park in Pittsburgh, for instance), there’s no franchise in baseball with greater demand and fewer seats. Given their tremendous history – to say nothing of their 2004 championship – the Sox can bet on drawing capacity crowds every time.

I would wager that the Red Sox can draw in more fans a season than the struggling Orioles3 (48,800 in Camden Yards) and at least as many as their rivals, the Yankees (56,500 in Yankee Stadium). By this logic, Fenway Park is at least 10,000 seats too small.

So what should happen? Should the Red Sox build a new baseball stadium, raise prices to a level where scalpers won’t be able to make a profitable resale, and start counting their future revenue? END_OF_DOCUMENT_TOKEN_TO_BE_REPLACED

The big news of today was that Jonathan Papelbon will be the Red Sox’s closer for the upcoming season. I am two minds of this, as I’ve been wanting to see him start regularly since he was first called up, but at the same time I definitely didn’t want to see Tavarez close out most of our games. Pick fights with Devil Rays, maybe, but not hold off tiny leads. I suppose I’ll have to deal with the idea of him as our fifth starter, which I guess is better in that he will be responsible for my stress every fifth day instead of every other day or so.

I took some pictures outside of Fenway Park this afternoon. By some I mean only three, as my memory card was already nearly full from a wedding I had attended the weekend previous. It didn’t really matter too much as Fenway is fugly right now as the snow has just started to melt and there’s a lot of construction everywhere. I suppose I could’ve taken pictures of the soon-to-be-opened Popeye’s, a chain I only recently learned that most New Englanders are not familiar with. The place is awesome, and they make KFC look like a fucking Whole Foods. I used to hit that place after high school and get their heart-stopping biscuits with my friend Spencer, who last I checked was a piano bar singer in Bethesda.

Anyway, the lack of substantive content is due to the fact that my league’s fantasy baseball draft is this Saturday. I am adrift in a sea of VLOOKUP and RANK Excel functions. I’ll let you know how it all broke down on Sunday.