Greetings everyone. I would first like to thank Serpico for holding down the fort while the rest of the Nerds on Sports team had seemingly gone AWOL. Maybe they’re busy playing at an online casino like 666Casino or whatever, I’ve heard it’s fun to play games, but it’s just a hunch. Reasons for our absence range from life-altering personal developments to just being a bum. Which of those apply to which writer is an exercise left to a reader, though amusing guesses are encouraged. 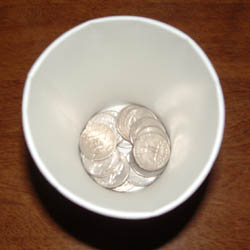 Anyway, I finally have a sports post to blog about, and its not an even a rant about my fantasy baseball team, which would appeal to no one. Instead, I have a story about the Lowell Spinners game I attended last Saturday. Now minor league baseball has some inherent virtues, like the simple pleasure of watching a baseball game for cheap, and starting players with an average of less than 100, but I’m not going to dwell on such things. Instead, I’m going to talk about the game Pass the Cup, which was played by Willis, Serpico, and I. The premise of the game, for those of you too lazy to click on the link, is that during the game, a cup is passed between players during the game, and depending on the outcome of the AB, players have to put money in or take money out (in our case, in the form of quarters), and pass the cup on or keep holding onto it. Much like fantasy baseball, it makes you have more of a vested interested in the game and causes you to at times cheer against the home team. But unlike fantasy baseball, where you might be interested in only a few players, pass the cup makes you more interested in every single AB, regardless of who it is, and regardless of who is holding the cup. During the game I was losing a lot of money, mostly due to that pesky mounders rule, but I was able to walk away with the whole pot with a game-ending double play. My copious winnings all went toward the exciting purchase of laundry.

Having gone through the game once, we are already seeking to tweak the rules. Willis has already proposed increasing the amount of money taken out for base hits, which would likely work out well given how large our pot grew. I also believe that additional rules could be added/changed, including:

Any other suggestions? Should some element of those weird audience participation games that take place between innings be added? Place a comment and let us know!

Baseball Baseball, it-s all fun and games until someone loses an eye