The Blogo-icosahedron is a large and hilarious place 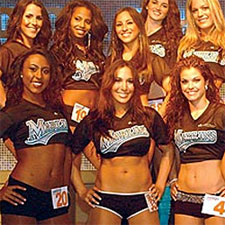 A friend of mine has started a sports trivia site, ChuckSports.com, check it out – it should only take you about 2 games to catch up to me on the overall leaderboard. It’s still a bit early in the development and he is coding everything himself, but it’s already fun.

Aside from trivia, there’s a lot going on out there in the world, and here are some on the things I found funny and interesting:

Kobe is possibly looking to be traded. I wonder where he is asking to go?

Curtis Granderson wrote in his blog about everyone wanting to marry him.

Elijah Dukes calls a radio station, and talks about the price of crack in the hood.

I’m always a big fan of crazy injuries sustained by athletes, so a salad injury is hilarious.

The Extrapolater does some research on the first Japanese player in the Major League.

We’ve talked about X-treme Baseball before, but Blumpkins For All (what a great name for a blog) went to a game.

Kissing Suzy Kolber has created a guide to American football for the English to help them prepare for the game next year.

With all those great links, I don’t know if you’ll have time, but here are some videos: