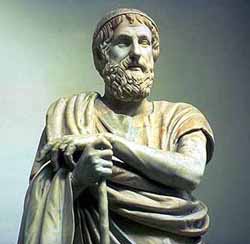 This is a continuation of Homer’s Youkissey

[44]Then the oft overlooked Mets replied “Father of all baseball, resident of New York, highest of all baseball teams, aye, verily that Red Sox lies low in a destruction that is their due; so too may any other also be destroyed who also be cursed (like the Cubs). But my heart is torn for wise Youkilis, hapless man, who far from his friends has long been suffering woes in a Rhode isle, where is the navel of Narragansett. It is a state of smallest representation*, and therein dwells a AAA team, daughter of the International League, who was born of 3 leagues — Eastern, New York, and Ontario, and holds tall the Governors’ Cup.

[55]This daughter it is that keeps back the sorrowing man; and ever with soft and hope-filled words she beguiles him that he may forget the majors. But Youkilis, after visiting the majors but sent back, yearns to return to his home, wants to quit baseball**. Yet you baseball teams take no heed of this. Did not Youkilis when in his debut hit a home run. Why then didst thou conceive such wrath against him, O lords of baseball?

[63]Then Selig, lap-dog of all owners, answered them: “My child, what a word has escaped the barrier of they teeth? How should I, then forget “god of walks”-like Youkilis, who is beyond all minor league mortals in consecutive games in which a player reached base, and has paid sacrifice to our Jewish god in Heaven? Nay, it is Bill Mueller, 2003 AL batting champion, who is blocking his advancement to the Bigs. Mueller, the double-grand slammer***, does not keep Youkilis in the minors forever. But come, let us who are here all take though of his return to the majors, that he may come home; and Mueller will retire, for he is on in age, and can not contend with youth.”

[80]Then the oft overlooked Mets answered him: “Father of all baseball, resident of New York, highest of all baseball teams, if indeed this is now well pleasing to the baseball gods, that wise Youkilis should return to the majors, let us send forth Joe Bick, the agent, his agent, to the isle Rhode, that with all speed he may sign a major league contract and the return of Youkilis of the steadfast eye, that he may come home. But, as for me, I will go to Queens, that I may the more entice Pedro Martinez, and free up some salary room for the Red Sox. I will guide him to New York, where he will receive tidings of his father****, if haply he may hear of it.”