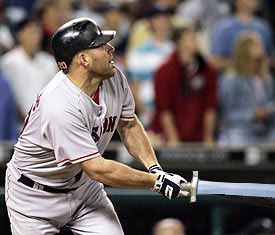 [1]Tell me, O Selig, of the man of many devices, who wandered full many ways after he had sacked the sacred citadel of Lowell. Many were the men whose cities he saw and whose mind he learned, aye, and many the woes he suffered in his heart upon the majors, seeking to win his own life and the New York-Penn League Crown of his comrades. Yet even so he saved not his comrades, though he desired it sore, for through their own blind folly they perished–fools, who devoured the kine of New York Yankees; but he took from them a many of skills. Of these things, god, daughter of Marie Huber Selig, beginning where thou wilt, tell thou even unto us.

[11]Now all the rest, as many hand not been called-up, were at home, safe from both The Yankees and Blue Jays, but Youkilis alone, filled with longing for to continue his streak of games reaching base, did get promoted Pawtucket, that Rhode Island city, The stadium – McCoy, location of the longest game of baseball. But when as the season passed, the day came in which the Front Office gods had ordained he should come to Boston, not even there was he free from toils, even among his own teammates. All the baseball gods pitied him save World Series; who continued to rage unceasingly against “god of walks”-like Youkilis until the season’s end.

[22]Now the Red Sox had gone off to the Angels, who are at the world’s end (LA), There, the teams are twain, one National League the other American. They had gone there to accept a hecatomb of homeruns and wins, and were enjoying themselves at their Division Series; But the other teams were meeting elsewhere. Among them the Bronx Bombers was the first to speak, for in their hearts they thought of the noble Bambino, whom far-famed Frazee, Sox Owner, had traded. Thinking on him as they spoke among the teams, and said:

[32]”Look you now, how ready fans are to blame us gods. It is from us, they say, that evils come, but they even of themselves, through their own bumbled between-the-legs folly, have sorrows beyond that which we could provide. Even as now, Ortiz homeruns, and they slew the Angels in 3 games, though well they know of sheer destruction, seeing as we face them next, sending Mussina, the hard-throwing Pennsylvanian, that a win shall come, but not of curses, for the Bambino would have wanted it that way. But the Red Sox, for all our good intent we prevailed upon their hearts; and now they shall pay the full price of ball.”

To be continued… Maybe… Should I?