As you, our beloved readers, have noted, there are distinct biases here at NoS. The staff is east-coast based, and we seem to talk an awful lot about baseball. So I’m taking this opportunity to switch it up and talk about tennis. Well, tennis and the internets. 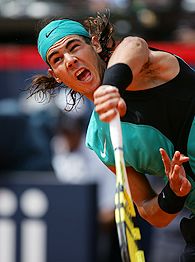 Rafael Nadal is an outstanding tennis player, especially on clay, which is evidently not just for making crappy ashtrays. He’s also a pretty well-spoken guy/part-time theologian, it would seem from this ESPN piece:

But, sadly, there are plenty of people in this world uninterested in Rafa’s eloquence or keen understanding of Pascal’s Wager. There are people who just want to ogle him and his girlfriend, a woman with the positively mythical name of Xisca.

Andy Roddick is pretty well known for being a tennis player who at one time dated Mandy Moore and appeared on “Sabrina the Teenage Witch” as– get this– himself! Also, he apparently has his own cologne now, and that’s appalling. I mean, if it smells like I think it might, which would be the locker room at Arthur Ashe in the middle of August. ???? ?????? Gross.

Here’s some demented person’s haunting tribute to this superstar tennis hottie, set (most fittingly) to Enrique Iglesias, who has been similarly irrelevant since 2004:

Creepiness: 1.75. This is the most boring of the lot, because in most of these pictures he’s actually playing tennis. But I’m forcibly reminded that Enrique Iglesias has that shiver-inducing mole, so there’s some points to be had there.

Marat Safin was somehow involved with some lunatics and the Marquis de Sade, or is possibly another tennis player. He’s from a country where they have accents and names like “Marat.” Probably France, but I’m too lazy to do research. Here’s a clip, and boy, this is a doozy:

Creepiness: 2.3. This is obviously a professional endeavor. Still, a little too much with the crotch-focus (though Rachel Whatley and Natalie Pinkham are lucky ladies!)

Some asshole kid got his hands on a tennis ball:

Creepiness: Willisesque. The shit kids put on Youtube makes my skin crawl sometimes, and this is one of those times. At least do something funny, and don’t write “pwn3d.” Ever. Goddamnit.

Here, you know what, this is ten minutes of kill yourself right here, I’m done with this shit:

C’mon, you gotta try harder–did you at least make it to “i’m tryna get in your pants?”

Next up, a PhD-level study of Anna Kournikova, Maria Sharapova, and sweaty neckbearded men who live in their mothers’ basements.