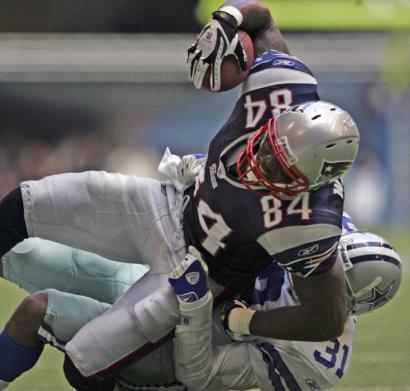 If you look a little further below you will see today’s main article. This continues our week long Super Bowl blog between our resident Patriots fan (Sean) and Giants fan (Serpico).

So you may have heard that this year’s Super Bowl will be decided in the trenches. Can’t argue with that. Logan Mankins, Chris Snee, Shaun O’Hara, and Matt Light headline two of the league’s best O-lines, a punishing set of brutal hand punchers and pancaking Norsemen. We’ve heard about the Pats front five since they were appearing in Visa ads years ago. Maybe they won’t be the big men. See, the random nature of the Super Bowl–it’s only one game, anything can happen–has lent itself to a number of unsung heroes over the years. You might not recognize the names Timmy Smith, Doug Williams, Larry Brown, Desmond Howard or Dexter Jackson, but those mostly marginal talents played the biggest game of their lives in…the biggest game of their lives. On Sunday, will the bright, shiny orbs in the sky align and smile upon any of the rakish brutes?

If they do, look for a bright glow surrounding Benjamin Watson, professional folk hero.

Benjamin (lengthened from “Ben” this year either to make Roethlisberger comfortable or else to make his own name appear more biblical) is a 6’3″, 255 lb beast of fury, with the mental acumen of a graduate student ninja. (Or so they say; he has an alleged 41 on the Wonderlic test.) The Pats drafted him in Round One in 2004, getting rid of their starting tight end Daniel Graham two years later. In 2005, in back to back playoff games, Watson made two of the greatest plays I’ve ever seen. Against Jacksonville, Watson took a short third down pass from Tom Brady, eluded five players while breaking three tackles, and rolled 63 yards downfield for a touchdown. The very next week Watson tracked down Denver’s Champ Bailey over 110 yards and nearly destroyed him. He’s a freak of nature who this year gained a partner in LB Adalius Thomas, a fellow fleet giant.

Of course, it could be Kevin Faulk who has a big game. Or Donte Stallworth. Or Jabar Gaffney. Or hell, maybe even Wes Welker or Randy Moss, who are pretty good, too. That’s the thing about an unsung hero; sometimes, they don’t show up because they don’t need to. But just in case, I’ll be pulling for Benjamin Watson, as he’s pulling the defense for another 20 yards.