The NBA has drafted 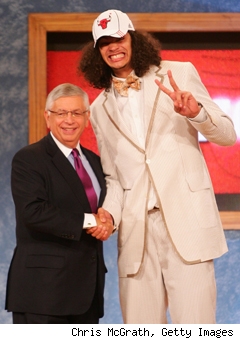 So last night was the NBA draft; and draft they did. There were no surprises early as Oden went first and Durant went second. Since I’m a Boston fan, I was wondering who the C’s would get. Now my knowledge of basketball is quite minimal, I was a fan in junior high school and some of high school (so about 15 years ago) and I have a terrible memory, but I do know the Celtics are in need of someone at every position because they currently suck. So I didn’t actually watch the draft (though I should have, just look at the hilarious picture [left] of Joakim Noah), I just followed the tickers and website reports. I get the info that the Celtics use the #5 pick to get Jeff Green from Georgetown.

So I do my due Google diligence to learn of this “Green” (look it works… Green plays for the green) character. I find this lovely chart:

Wow, his intangibles are pretty high… Wait they’ve figured out how to measure intangibles!? Lets get Jeter tested and find out where exactly he falls on this scale. I guess with intangibles like this it’s good that we got him instead of my choice of “the Chinese guy.” Danny Ainge must know what he’s doing.

Well, since I live under a basketball rock, it was at least an hour before I checked in on things again and realized that Green was part of a “super secret” trade. Would you look at that, another good player on the Celtics. Welcome to town Ray Allen, maybe I’ll write a song about/for you.