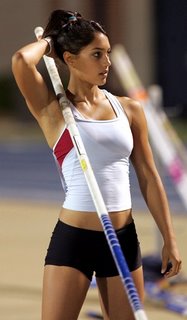 I’m like most guys — I like sports and women and never the twain shall meet. Though, if the internet and blogo-icosahedron (yes blogs are a 20-sided die) have any say the 2 shall never part. The picture on the left is of Allison Stokke, a high school pole vaulter from California. ?????? ??? Do a Google search for her and you get over 185,000 results. About a pole vaulter. In High School. Now do a search for Rudy Ruettiger. Half the results. The Internet has spoken, and it wants you to know about women and sports.

After the crazy sexy women stuff, it started to get weird. Weird like some sort of role reversal thing was happening where the women were in charge and the men were the objects. ????? ?????? Perhaps a bracket contest to rank the eligible men of sports blogging. I even started reading Red Sox Chick because I’m amazed that there are female RedSox fans that understand baseball and aren’t just wearing pink hats and going to Fenway in 4 inch spike heels (I saw this at the last game I was at; I cried a little on the inside.) just to be seen. Red Sox Chick isn’t the only lady at baseball games because Babes Love Baseball too.

It was a long few days rolling the blogo-icosahedron, but I learned a few things very little. I do know that bloggers frighten me more now then they did before I had a blog. I learned that it is possible to punch ballpark kitty from a few crazy Canadians. In a related event, I learned that the Toronto Blue Jays have fans. ?????? ??? ???? Also, I learned from some Ladies… How To Make Love To A Mets Fan.