So let’s talk about-and by ‘talk about’ I mean HIT HARD, IN DEPTH- the issues of public transportation and sporting venues and interleague rivalries.

Every single “Subway Series” has included the Yankees. The Dodgers-Giants games when both called NYC home were not referred to as “subway series,” probably because marketing had not yet been invented, but when either met the once-fearsome Bronx Bombers in the postseason such meeting would carry the moniker. But now, the ungrateful Heirs of Ruth are turning their back on the B/D/4 lines. The Yankees are getting a Metro-North station. The Mets have always had a LIRR station, and Citi Field’s construction will do nothing to alter the ludicrousness of the boardwalk/ bridge/ outdoor-pretzel-and-poorly-made-hat-market that spans Flushing Meadows-Corona Park. The only excuse for taking the LIRR to Shea is if you’re coming from the West Side or further out on the Port Washington branch. It costs more to take the LIRR train to Shea than it should, and the crowds after a weekend game or during the US Tennis Open are usually pretty nuts, but it’s relatively unobjectionable for any given patron to travel to the Iron Triangle of Corona as they see fit.

But I want to go on record with something here. If, once it becomes possible to do so, you take the Metro-North train from Grand Central Station to Yankee Stadium, you are an asshole. Take the 4 train. It’s actually easier, cheaper, and the station is closer to the stadium. If you are willing to spend extra money because Bronx residents won’t, well, I always knew I was right about you.Â  Take the Metro-North from Westchester, though.Â  Less driving=better all around.

My thoughts on gentrification, assholes, and neighborhood demographics in New York can wait for another piece, or better yet- another, far more boring blog. Let’s move on to some other places in the country, which apparently exist, and their cute little baseball rivalries.

This is played between the Los Angeles Dodgers and the Los Angeles Angels of Anaheim (Translated, “The The Angels Angels de Anaheim,”) two teams who are located in Southern California. I’ve never been to California, nor do I plan to go there soon as I am very frightened of earthquakes. Also snowglobes, I’m terrified of those. Anyway, in California people are complete douchebags, and so they evidently don’t have any public transportation that is not currently being exploded by Dennis Hopper.Â  Didn’t they see that movie where Al Gore ate nothing but Big Macs and talked about school shootings? So they have to drive, which leads to both smog and hilarity on Curb Your Enthusiasm. The winner of this series gets some blow and a walk-on in the next Penny Marshall movie.

First off, this is a terrifying notion, because the concept of Dmitri Young in Baltimore is scarier than that dream I had where Tim McCarver was still allowed to provide commentary for baseball broadcasts. This is a rivalry? You can’t be serious. Anyone cares about either the Orioles or the Nationals? I mean, correct me if I’m wrong, but I’d be a little more excited about Bethesda Little League games. Anyway, transportation-wise this is the biggest clusterfuck of the lot. There’s public transportation both places, but if memory of trips with my mother serves correctly, the DC Metro’s relatively useless for doing anything but going to see that boring-ass part of the Smithsonian (as in, not Air and Space). And between the stadia, you have to drive or hand over your fate to a Chinatown bus. Here’s a short list of things I’d prefer to driving anywhere near DC: hooking my testicles to a car battery, eating a copy of Infinite Jest, dog-sitting for Michael Vick. (All are preferable to exiting a car in Baltimore, however.) The winner of this series gets to punch Peter Angelos in the junk, so both teams want very much to win.

The White Sox-Cubs rivalry is probably my favorite, from an outsider’s viewpoint, as Chicago baseball features stories about goats, shoeless guys, that kid who broke his arm and then threw 103mph at age 12, A.J. Pierzynski, and futility. There is even a single (!) el-train line that goes between Wrigley and ComiskeyUS Cellular, so the transportation factor is awesome. But the Cubs are involved, so the stakes will always be fairly low. The winner of this series gets to wait for Lou Pinella outside an Anger Management session with a picture of Ryan Dempster.

The Second Battle of Bull Run

This was in the Civil War, and had very little to do with baseball- well, outside the impromptu pepper game featuring the zany batting antics of Jefferson Davis and George McClellan.

A’s vs. Giants. The BART trains connect Oakland and San Francisco, but aforementioned California assholes prefer driving across the bridge. If the games are in San Francisco, some people kayak pretty much right into to right field. Hopefully Barry Bonds is convicted of something soon, and then we can all go back to ignoring Northern California baseball. The winner of this series gets to work with Sean Connery to recapture Alcatraz from the terrorists. 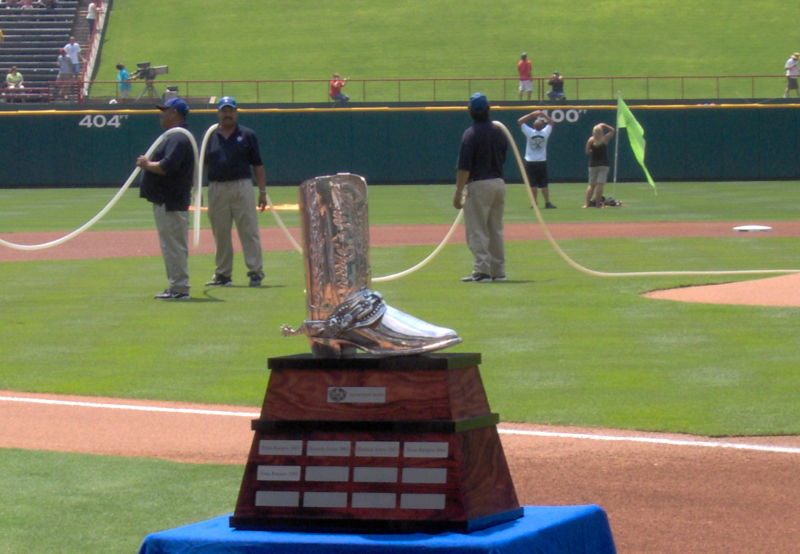 Holy shit, that’s cool. The winner of the season series between the Rangers and Astros gets the Silver Boot. Basically, this season, this comes down to whoever gives the ball to their bullpen the least, or possibly the most, or maybe Michael Young has something to do with it, I really don’t give a flying shit about Texas baseball. The only public transportation involved in this series is that you can hop in the ambulance that comes to pick up Eric Gagne.

So that’s interleague rivalries and their transportation modes in a nutshell. Comment? Defense of the Orioles?