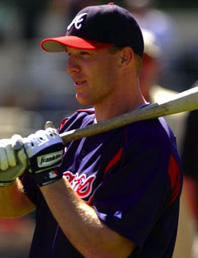 On Saturday I was able to catch the Mets v. Braves game on The Braves Station (from heretofore know as TBS). Well TBS decided to place a microphone on a certain Braves player: Peterson Thomas “Pete” Orr. Well, Pete decided to talk, sing, make sound effects and other wacky things that TBS could use in montage form. (We all know that a montage is the sincerest form of flattery. ????? ???? ???????? ) And montage they did!

Orr was also singing along when the stadium sound system was playing My Girl, but using his own words: “I guess [Craig] Wilson says ‘I get weirder every day.’” What TBS didn’t show us was the whole song. Well, I called some of my connections, made some deals, and got the full transcript of the entire song. I hope you like it.

I’m a Brave on a chilly day.
Damn, it’s cold outside – Wish I were a Devil Ray.
I guess you’d say
What can make me feel this way?
Bravos, (Bravos, Bravos)
Talkin’ ’bout Bravos (Bravos)

I’m a Canadian so that makes me fey
When I get outside I hit into a double play.
I guess Wilson says
“I get weirder every day”
Bravos, (Bravos, Bravos)
Talkin’ ’bout Bravos (Bravos)

I don’t need no money, fortune, or fame.
We’ve got all the players baby one team can claim.
I guess you’d say
What can make me feel this way?
Bravos, (Bravos, Bravos)
Talkin’ ’bout Bravos (Bravos)

I’ve got sunshine on an October day
with Bravos
I wouldn’t have that as a Devil Ray
so: Bravos