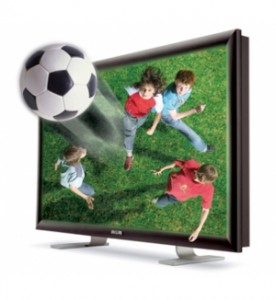 Really, the coin toss is the best part of 3D? NFL is really selling me on this is the future.

“It’s amazing,” said Chad Ahrendt, a 35-year-old writer from Los Angeles who attended the screening in Hollywood. “Technically they obviously have a little ways to go, but once they work out all the kinks, it’s definitely the new era of television.”

Thanks Chad, the random 35-year old guy. I know nothing of journalism and haven’t been trained in the ways of making money for stringing words together, but it would be nice to know who he works for. Isn’t this a room filled with VIPs? I don’t care about his age, unless he’s 70 and complaining about kids now-a-days and their high-tech picture boxes.

John Modell, 48, co-founder of 3ality Digital, the Burbank-based company that put on the show for the NFL, said the demonstration was a good learning experience, and that team owners viewing in New York and Boston had told him they were pleased.

“They’re all knocked out,” he said.

Because we gave them tons of free booze.

The NFL has not decided what to do with the technology, but the team owners’ broadcasting committee will meet some time before March to discuss it.

Howard Katz, the senior vice president of the NFL’s broadcasting and media operations, has said the NFL is for now committed to free, over-the-air broadcasts if and when they adopt 3-D technology. Only about 2% of the nation’s TV sets are equipped to handle 3-D broadcasts.

Oh good, this is ready for the masses then, and the earlier black outs are nothing to worry about.

On Thursday, some systems at a Salt Lake City location had to be rebooted to restart the satellite feed and some camera crews performed pans that ended up leaving the viewers a bit cross-eyed, Modell said.

“Well, this is a test,” he said. “It’s a learning experience for the director and for the camera people how to shoot.”

Some scenes clearly captured the benefits of 3-D broadcasts, however, such as an interception by Chargers linebacker Stephen Cooper as players crisscrossed the field, and a long touchdown catch by San Diego’s Vincent Jackson with the arc of the ball caught on camera all the way.

But nowhere near as good as that amazing coin toss. It was like having my very own oversized NFL coin tossing coin.

Viewers were encouraged to text in their reaction to the viewing.

One of the first comments, according to the commentators: “More cheerleaders.”

So, the NFL, and NCAA/BCS are trying some 3-Dimensional trickery, what about other sports? The NBA All-Star game to be 3D, Some rugby in the UK, and who knows what else the future may hold. Ok, great, sports are embracing a third dimension, but when do they embrace a 4th dimension and broadcast in HYPERCUBE? ????? ??? ?????? When does it feel like I’m on the field tossing the coin? When will I stop asking stupid questions to no one in particular? Probably never, but for now I will ask (and start to answer) one more question: Is this good?

I not the one to decide if this is really good or not for a few reasons. First off, who am I to be claiming knowledge of what’s good and evil – I’m a lowly spare time sports blogger. Secondly, I haven’t tried out any 3D sports. Best I have to show is some 3D underwater show at the IMAX. So I will just list some pros and cons that I see and let you decide.

What do you think?