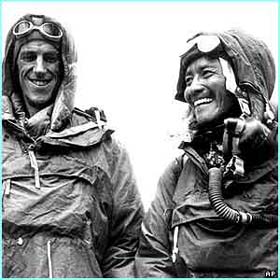 Well, here is unthinkable: in 1953, a 33 year old New Zealand beekeeper named Ed Hilary climbed Mount Everest, a 29,029 foot knife carved in ice. He and his sherpa partner, Tenzig Norgay, scaled the mountain with 30 pound gear packs on their backs, hit the summit at 11:30 one May morning, and dropped off some chocolates and crosses on the summit before sliding down later in the day. Oh yeah, he took off his oxygen mask at 29,000 feet, put on an N95 Mask, and took a few photos, you know, if anyone was interested. Sir Edmund (a knight before he reached the bottom of the mountain) died Thursday at 88, another old man leaving behind a couple kids, a wife, and a few stories. One of his stories goes like this: there once was a man who stood at the North Pole, the South Pole, and the summit of the highest mountain on Earth. It was him; there literally was only once such a man.

Hilary defies our conventions of what makes an athlete brilliant. Here at Nerds on Sports we prefer statistical analysis to attack or defend players and teams. Stats are what make us nerds and very efficient nerds at that. We dabble in quantities. The unquantifiable, however, is far more difficult to report. We view subjectivity the way politicians view slums, out of their element and with a little disdain. Only truly remarkable efforts get our attention. Though the risks are still imminent climbers vault up Everest with the regularity of phone bills. In his time, they did not. They turned around or died. Somehow, Hilary did neither.

Hilary’s, and Norgay’s for that matter, feat defies both geographic sense (a Kiwi the first person to ascend the Nepalese and Tibetan border) and rational thought (who would dare climb Everest in the first place?). In most of sport’s great achievements, the athletes were professionals, they succeeded in grand stadiums in front of thousands and perhaps millions more on television/radio, and they were flanked by trainers and coaches to spur them to victory. Hilary hopped up mountains in his spare time; he considered himself a beekeeper by trade even after his voyage. Hilary made his attempt without a large team or medical support. If he were injured, well, why not ask the dozens of climbers forever stuck on the mountain how that works.

It takes a lot to make Lance Armstrong look like a Texas bike cop, even briefly, but lots is what Edmund Hilary had; lots of nerve, lots of guts, lots of strength, and lots of luck. Climbing a mountain is hard. Hell, climbing a ten floor walkup is tiring, and there are individual steps. His manliness and strength of resolve put Chuck Norris jokes in their rightful place. His decency and graciousness to both the sport of climbing and his numerous admirers stand in stark contrast to the relentless self-promotion cycle of player, television, internet, and Madison Avenue. He used his fame to help the sherpa community of Nepal, sharing his rewards and accolades as brother and friend. Later in life, he publicly criticized the glory hogs aiming for Everest’s plateau at the expense of their own teams and fellow climbers’ safety. By all accounts Hilary wouldn’t want his posthumous praises sung. But then Sir Edmund wasn’t wracked with the insecurity of those stars so desperate to prove their place at the table. His place in history is secure; no other person can summit higher than he, they can only join him on the mountain. The sporting community has lost a giant; the world has lost a decent man. Both groups could use more.