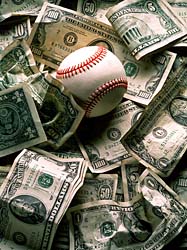 We all know Major League Baseball is a big money making business. Well that business thinks that it needs to protect itself from stats nerds like us. Because we’re using those stats to create a fantasy world of increased baseball enjoyment. ????? ???? ????? This is nothing new — in 2006 CBC Media (a small fantasy site) sued the MLB because they didn’t think they should fork over some dough to the MLB to use player’s name and stats. A judge ruled that CBC has first amendment rights to things publicly given to everyone in the newspaper.After that loss MLB decided to switch up their thinking. “We’ve agreed that the stats and names are in the public domain,” MLB Advanced Media spokesman Gallagher said after the ruling. ????? ??? ???? “But when you start to use team’s logos and other images as CBC did, you need a license, it’s that simple.”

You should be very careful when considering a medical malpractice lawsuit. If you case is unreasonable or unfounded, you may be getting involved in a long and expensive process with no positive outcome. You should also be sure that you are filing the lawsuit for the right reasons. Anger and grief fuel many lawsuits today and some of them may even be successful with the right lawyer. But if you have a good case, a respectable medical malpractice attorney will be able to help you get your deserved payment. Most people think that by hiring a medical malpractice attorney, you’re only looking to get rich. However, most people who win their malpractice cases, or receive a settlement, have to pay the attorney, they have to pay for their medical expenses caused by the malpractice, and they have to support themselves if they’re out of work due to their new injuries. All of those payouts can quickly drain any settlement a person may receive for malpractice reasons. It’s not a way to get rich. ???? ????? ?? ???????? Instead, hiring a medical malpractice attorney and winning your case is vindication for the wrong that’s been done to you, and it will also teach the doctor or surgeon a lesson.

Just the other day, the US Court of Appeals for the Eighth Circuit upheld (PDF) the original ruling. (There was one judge dissenting, but the dissent was because of previous contract issues, not the first amendment rights.) So the next stop is the Supreme Court? I don’t think Ruth Bader Ginsburg is a baseball fan, how do you think she would rule?

And for a little fun, I have the starting lineup for your SCOTUS Blind Justices: