Drinking Wine with the Red Sox

Every time I go into a liquor store there is always a large stack of these Red Sox charity wines. It’s like “Get Drunk, Help Children. ???? ???? ?????? ” So I decided that a tasting (and getting drunk to help the children) was necessary. I had one tasting with RJ (and other non Nerds on Sports) that involved watching Red Sox, eating cheese and drinking wine. Then I had a second tasting with Peiser that was a precursor to a beer tasting event later in the day. 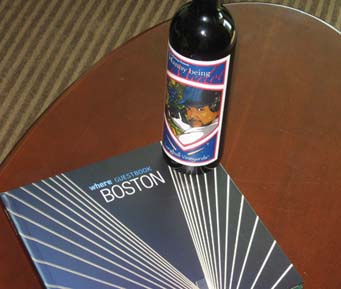 For tasting 1, I paired the Wakefield Caberknuckle with some Cheddar, Monterrey Jack, and Gouda (from Ireland). Ok, I didn’t really choose the pairing, I chose the cheese and gave the guests the choice of Manny Being Merlot or the Caberknuckle. The Caberknuckle describes itself as being well paired with grilled meats, burgers, pasta, and pizza. Sadly all I had was cheese and crackers, so that would have to do. Now before I go any further into this “review” I want to say that I’m not a wine person and when I do drink wine I usually drink something whiter and/or cheaper.

The bottle describes itself as showing “a deep red color with aromas of blackberries, currants and a hint of spice. With it’s long smooth finish, this [is a] well-balanced red.” I have to agree that the aroma (Don’t the winos call this the “nose?”) is good. I don’t know what a currant smells like. Hell, I don’t even know what a currant looks like. The aroma of this 2005 Cabernet Sauvignon is delicious. I could have just smelled my glass for a while but I don’t know if I would classify it as blackberries and currants – there was definitely a grape scent in there too. ????? ??????? ???? But maybe there’s some unwritten rule about not talking about the grapes. The taste, on the other hand, wasn’t as great. Nowhere near as fruity as the scent led me to believe and I think it had a bit of that “spice” that was supposedly in the aroma. It wasn’t for me. 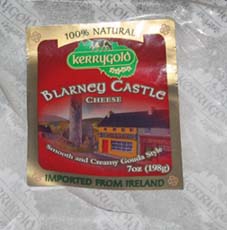 Here’s what RJ had to say:

I am not an oenophile. The only alcohol I’m at all pretentious about is beer. For me, wine is either good, ok, bad, or comes in a box. The Cabernuckle I had was ok, in that it left no impression on me whatsoever. I hadn’t had dinner at the time and was starving, though, so I was resistant to have a lot of it. I was more focused on eating as much crackers and cheese as possible. The “Blarney Castle” cheese was quite good. So I recommend that instead.

For the second tasting Peiser was visiting Boston and staying in a beautiful suite high in the Sheraton Copley tower (he lucked out with magical upgrades). So I went to his room with a bottle of Manny Being Merlot in tow and I’ll let him describe the event:

I don’t normally drink merlot. This is not because I watched “Sideways” and agreed with Paul Giamatti that merlot sucks; rather, I think it sucks anyway and find that film unwatchably smug. But even crappy wine is wine, and I don’t need my arm twisted to have a glass (or 9) of wine. Thus, I happily sat with Willis to experience Manny Being Merlot, though I look forward to Ells-berry Schnapps next time they make these things.

Notes from a tasting:

Since I failed to bring a wine key along on my trip to Boston, we had to ask the concierge for a loaner to pop the cork. This is notable only because I have not otherwise left the house without a corkscrew in several years. We borrowed one of those crappy little plastic ones, which was apparently in Bolivia given the time involved in its retrieval, and set out to open the bottle. 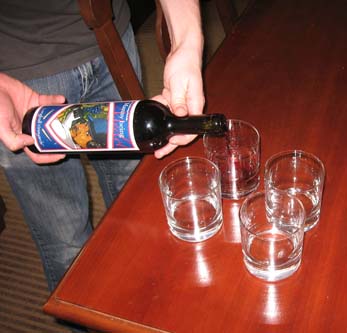 Manny Being Merlot is not a great wine. It’s not even really a good wine. It does send money to charity, which is nice, and it does have a picture of Manny Ramirez on the bottle, which is pretty awesome, but it’s not about to give Chateau Lafite Rothschild a run for its money. Truth be told, I kinda prefer Two Three-Buck Chuck. This is, to quote Python, “not a wine for drinking. This is a wine for laying down and avoiding.” Not much to the tasting, really: MBM is not a big wine, and it’s one with a spicy bite and an F-14 grade afterburn. The bottle said “black pepper and red fruit” and, sure, why not. The pepper I definitely picked up, and there was a plummy note somewhere in there. The tasting concluded, predictably, with the bottle winding up empty and your intrepid editors heading out into the afternoon in search of something better to drink: we went to a beer tasting, and that was pretty exceptional. I can recommend without reservation Liefman’s Goudenband, a sour Flemish ale, as a surefire way to make sure you stop thinking about MBM; it’s a pretty outstanding beer.

Peiser pretty much says it all. 1xbet ??? ???? In comparison to the Wakefield, it didn’t smell as nice, but it didn’t taste as bad. The Liefman’s Goudenband was pretty damn good. The fact that it has a Michael Jackson quote on the label was also pretty hilarious to us also. What, don’t believe me? Go to the website. Yes, it turns out that Michael Jackson is some famous Beer Hunter, but whatever.