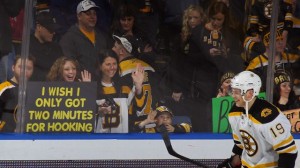 Is it just me, or does it seem like sports trend of using and studying more statistics (especially newly tracked numbers) to improve your team not really affecting hockey all that much. ??? ????? ?? ???????? ????? There’s been a trend toward Finnish goaltenders who are great at not giving up rebounds and forcing the puck to the corner, but I don’t think that was due to any study of the actual numbers, just people realizing that the goaltenders coming from Finland are awesome.

Most people don’t recognize just how big the difference is, and the data suggests that teams should be trying harder than they are to carry the puck in. If coaches are telling their third line to dump the puck, they are probably giving away scoring chances. If coaches are telling the players to dump the puck in borderline situations where they think carrying it might lead to a turnover, they are probably giving away scoring chances. ???? ????? Even regrouping and trying again might be better than dumping the puck in, especially when the team has their top line on the ice.

Of course this all needs to be taken with a grain of skepticism, as the dataset is very small and who knows what a larger amount of data will say about these preliminary conclusions. ??? ???? ?????

This past weekend at MIT was what Mark Cuban calls “Geekapollooza,” but what everyone else calls the MIT Sloan Sports Analytics Conference.  It’s nice to see that the professional nerds on sports have their own conference. ???? ????? ?????  The description from their site states:

The conference goal is to provide a forum for industry professionals (executives and leading researchers) and students to discuss the increasing role of analytics in the sports industry. MIT Sloan is dedicated to fostering growth in this arena, and the conference enriches opportunities for learning about the sports business world. The conference is open to anyone interested in sports.

Though the real description is that a bunch of (usually highly educated) nerds come together with the people in sports management and discuss their idea and breakthroughs in statistics and analytics. The ESPN Numbers Never Lie team made a little video that explains the conference well:

As far as I can tell from what I saw/read/heard about coming out of SSAC these are the important stories:

To end this, I’ll leave you with a video of Kevin McHale, who, though not as hating as Joe Morgan, has never been a fan of all the advanced statistical analysis until (as you’ll see at about 2/3s into the video the video) he realizes that his GM (Daryl Morey) is a big fan of this stuff. So much so that he’s a co-chair at Sloan.