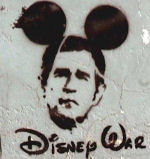 Disney may not have a good name in Europe, but the people, the obese Americans, at the National Football League do. (Have you seen an offensive line recently? They have average weights above 300 lbs.) Or so the NFL would have us believe they have a good name. They are in some preliminary investigations with Europe… I picture this as a noir style investigation (also it’s Tagliabue not Goodell doing the investigation in my mind because I think “P.I. P. Tagliabue” would look better on the frosted glass window to a Private Investigator’s office.): END_OF_DOCUMENT_TOKEN_TO_BE_REPLACED