In this round we have 4 different groups of games. Again I’ll start with the easier ones.

2/7/10/15 – While this isn’t as cut and dry as the 1 seed games, the 2 seed moves on 65% of the time. If you’re looking for a 2 seed to fall, look at experience. This year Missouri is a 2 seed but they got a pretty new coach and they could go against Florida with Billy Donovan who’s taken his squad to the Elite 8 4 times. Other than that, go with #2.

4/5/12/13 – If for some reason you have a 12v13 match here, pick the 12 seed as they have a 8-1 record but if you want to dig deeper, pick the team with more experience in the tournament. If you have a 12/13 going against a 4/5 It’s not as cut and dry as the seed value may imply as, historically, this upset is relatively common. The most likely match-up is, of course, the 4v5. History doesn’t tell you too much with 4’s having a slight edge winning 52% of the time. I’d look at points per game and Pythagorean expectation here… and that makes me look at maybe New Mexico over Louisville, but it would be hard to pick against Pitino and his experience.

3/6/11/14 – If it’s 3v11 or 6v14 you should probably go with the 3/6 as they have won 72% of these past match-ups. The 3v6 game is where you need to spend some time. If I had to pick an upset here, I’d go with Cincinnati. Maybe you want to go against the crowd? Pick UNLV to upset Baylor, hell, pick them to take down the Blue Devils. No one likes Duke so it’s a feel good pick and if it happens, no one else in your pool made that pick.

1 Seed Bracket – on average, three out of 4 top seeds will make it past this round. Remember that when you decide you want to take down a 1 seed. Which one of the 4 looks ripe for the picking this year? Syracuse. They’d most likely take on a very good Wisconsin team and they are down one of their better players. Then again, you could play the odds and just advance the 1 seed if you wanted to be a bit more low risk. 2 Seed Bracket – In general the 2 seed wins here (70%) but if it’s 2v3 then it’s more reasonable (62%). If you’re looking for a team other than the 2 seed to come out of this bracket, I’d say maybe Baylor (or maybe even UNLV) over Duke or, for even more madness, pick Florida over Marquette – It could happen. 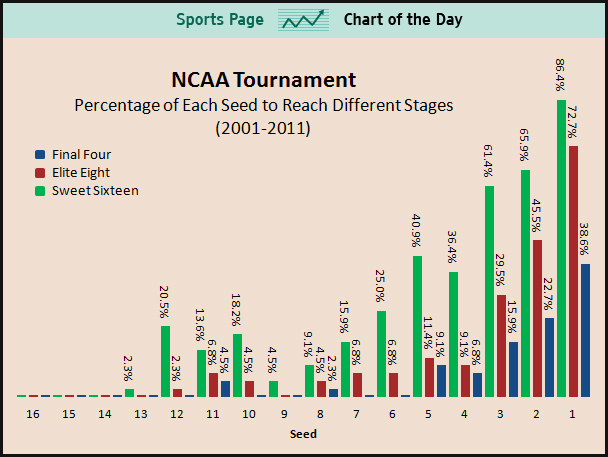 Look at the blue lines in the above chart. You should probably keep your Final Four selections to that realm of possibility. Look at what 1 seeds look weakest (Syracuse) or look at the better 2/3/4 seeds (Ohio State, Kansas, Baylor, Wisconsin) and make you selections from them.

Seeding can now be tossed out the window for the birds because that doesn’t matter anymore. Here’s where you pick the better teams for some other reason. Maybe you want to go by AP rankings? Kentucky (champion pick) over Missouri (because you have Missouri (3) over Michigan State (5) in the Elite 8) and Syracuse over North Carolina. Perhaps you want to go with Pythagorean expectation, that would be Kentucky (champion pick) over Michigan State and Ohio State over Kansas. Whatever you go with make sure that you have a road for a good…

Look at that chart above. 4 of the last 11 years it was a team that was not a 1 seed. Want to go back another 11 years? The 1 seeds won 68% of the time. That’s 2 out of every 3 years. So you want to win your pool? You should probably stick with a 1 seed. Perhaps go with North Carolina like President Obama:

I hope that this helps you, because it helped me make my decisions even though I went against the math a few times.

There are hundreds of ways to go about picking your office pool brackets. You can go with your gut. You can go with the cooler mascot. You can go with whatever school has a higher seed and toss-ups based on a coin flip. Or you can be a giant nerd like myself and pour over a giant spreadsheet full of numbers trying to predict the future better than Miss Cleo. All of these strategies have merit and when it comes down to it, it’s still the future and we don’t know what will happen.

What I’m going to do today and tomorrow (in the morning so you can use this knowledge for yourself) is post my opinions and feelings and you can do with that what you will. (My suggestion would be to do the opposite of whatever I think.)

First a little primer from ESPN’s Numbers Never Lie for a quick rundown of making your picks with the help of numbers.

Let’s start with the 1 seeds: The #1 seeds have lost the opening game 0% of the time So here’s an easy 4 points. Actually, I’ll go even further: Advance the 1 seeds to the Elite 8 (History shows that #1s make it this far 85% of the time). If you pick against a 1 seed here, you are probably giving away points. The tough call would be Syracuse with a missing Fab Melo, and a lower Pythagorean Expectation then Wisconsin.

3 v 14: The #3 has won 85% of time in the past so now is the time to look into possible first round upsets, but looking at the field this year, I don’t see anything upsetting.

4v13: The lower seed wins 78% of the time here. So picking the right upset at this level might be nice. If I had to choose one, I’d take a look at New Mexico State over Indiana. Upset here would probably come from a high scoring team doing well, and NM St. are the highest of the 13 seeds with an average of 78.5 points per game.

5v12: Time to stop giving the low seeds a free pass. Lower seeded teams only take 67% of these games historically. This year I’d think about upsets from VCU, who did well last year, or Cal (if they win tonight) based on their Pythagorean expectation.

6v11: Again 67% to the lower seeded team historically and that is against the trend of recent years. Possible upset here would be Texas over Cincinnati based again off Pythagorean  but also coaching experience.

7v10: 60% for the 7 seed. Possible upsets here would be Purdue over St. Mary’s or Virginia over Florida.

8v9: Pretty much 50-50 — Actually the 9 seed wins this 53% of the time. Since this is pretty much a toss-up anyway, go with your favorite method to pick these. Mine (as you may have noticed) is Pythagorean  expectation. With this the only “upset” (can a 9 over an 8 be an upset?) being Alabama over Creighton. Don’t worry too much about these games, because the winner is just going to lose to the 1 seed in the second round.

That should cover you for about 32 games. I hope to go over the remaining 32 games and to finish this all up tomorrow morning. Until Then you can check out this list of reasons to root for each team in the tourney. Also check out Wired for their method of going against the crowd to gain points that no one else in your pool will.