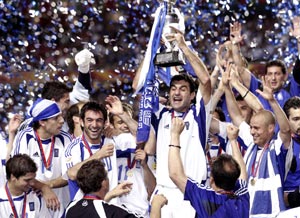 The Pirate Ship, as they are affectionately and bafflingly known, will attempt to board and assail Sweden in Salzburg today, the second UEFA Group D game in this 2008 EURO menagerie. Their title defense is garnering all the press and rockstar adulation as “Tree Falls in Forest; No One Around”. Bookmakers listed the Greeks, in a moment of generosity, as a pre-tournament 33-1 longshot, now at least acknowledged within the realm of possibility. ??????? ????? Other group foes in the Swedes and Russians have similar odds, and the favored Spaniards’ expected dominance is so grand that they might not even have to play until the semifinals, despite the red shirted titans’ Cubs-in-October level of championship history.

So why the hate on the Greeks? For one, they play anti-American football: it’s boring. The wunderkids stole Euro ’04 with only seven goals in six games, including three consecutive knockout stage 1-0 yawns. Plodding, violent defensive football harkens back to the abortion of World Cup 1990 more than the excitement and skill of say, the masterful Dutch second goal against the crippled Azzurri yesterday. Besides, 1-0 games are simply more random; if you don’t have the offense, you can’t play from behind. ???? ?????? (Spain, for its part, is proving this by currently thumping the Russians; Prime Minister Putin will be displeased, and yes I know what I just said.) More importantly, Greece is Joe Morgan’s nightmare too; inconsistent. Fresh off their stunning triumph the national team couldn’t even qualify for the 2006 World Cup, as manager Otto Rehhagel kept pretty much the same team for qualifying despite the age and retirement from league play by some of its members. ????? ?????? ????????