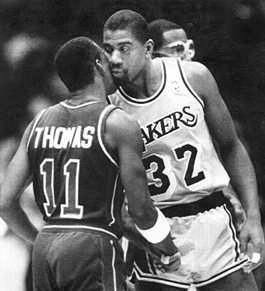 You can’t walk a straight line in bookstores without stumbling over some Greatest Super Bowls tome or The Fall Classic: We Remember solemnly poking out from the shelves. The NBA’s championship is far more suspect, the nature of the game makes seven taut games nearly impossible. Stars, or even simply good players, on a championship team account for 20+% of a team’s output on the court. Losing that for one game mostly ensures defeat. Home court is also advantageous for an NBA team in the playoffs more than hockey (where just playing seems to be the important thing), football (no home advantage in a Super Bowl), or even baseball (pitching matchups dictate advantages). Look at the New Orleans – San Antonio series, with seven grueling games providing a dinghy’s worth of highlights. Every other game was a blowout, double digit homecourt slapping, while only Game Seven met its classic billing, where a road team actually won a close game. Jannero Pargo missed a 3 pointer to tie the game up with two minutes left, Tony Parker glided over a Tim Duncan screen and stroked a j, and that was the whole piñata. The final result exists like some propaganda; the Spurs only won because someone told you they did. Who are you to remember any of it? END_OF_DOCUMENT_TOKEN_TO_BE_REPLACED