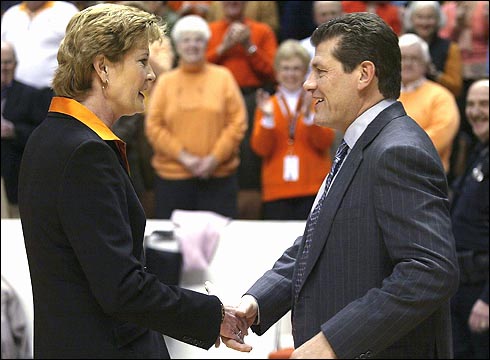 TAMPA, FL–The UConn Women’s Huskies and Tennessee Lady Volunteers’ NCAA Women’s Championship basketball game has been hijacked this month by sixty-two additional games played by some 60+ additional teams. ??? ???? bet365 The championship, previously scheduled for March 12, will be pushed all the way to April 8. Some of these charlatan universities inexplicably challenged the two schools to matchups themselves.

“It’s just rude, quite frankly,” said UConn coach Geno Auriemma. “Our girls were looking forward to our annual preordained slugfest when I got a call from Erica (Naughton, NCAA “Selection Committee”) ordering me to face off against this Cornell school, or something. Never heard of them. Then we had to keep playing more until she was satisfied. ???? ????? ??? ????????? I told her, ‘Yeah, sure I’ll play Rutgers, and beat them in the friggin’ regular season finale a month ago’, but she had none of it. Politics, maybe.”

had sent her team home for spring break after a win over Boston University in the America East Conference Championship. “I thought, great game, something to build on next year, maybe down the road we could send a nice letter to Storrs and see if we could practice against them in a November tune-up,” said Rizzotti from a hotel room in Baton Rouge. ????? ??? ??????? ?????? “We had to cut three players’ trips to Cancun short for this stupid thing. What’s the point?” In a sign of protest, Pittsburgh University sent only their mascot ROC