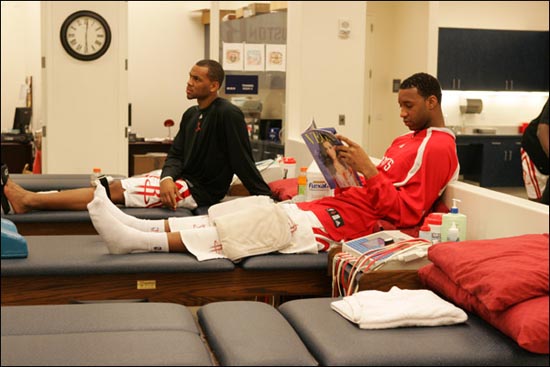 See, that day franchise center and all-around tall man Yao Ming went down for the season. A fracture in his

left foot has become a devastating blow to a red-hot Rocket squad and perhaps a chilling prediction of future maladies for Yao’s problematic legs. Results were for the most part predictable. The team gnashed their teeth and wailed; fans burned their jerseys and rioted, the Toyota Center opened up the May calendar to truck shows and hockey exhibitions. The only thing that didn’t make any sense is that the Rockets won another six in a row. McGrady has picked up his play, leading the charge in victories first at Dallas and then last night over Western dark horse New Orleans. In these two big tests he’s averaged 36 points, 5 rebounds, and 9 assists.

And yet. And yet.

Were Houston uprooted by some basketball Atlas and planted in, say, rural Vermont, the Rockets might be considered one of the favorites. But in that other conference, the Rockets are but a drop in a bucket of basketball excellence. The 9th place New Jersey Nets are 11 games under . ??????? ??? ???? 500; the 9th place Denver Nuggets are 12 games over. Eastern 3rd seed Orlando is statistically tied with Western 8th place Golden State.

You don’t want to know where the defending East champion Cavs would be. The Rockets could conceivably win 55 games and finish fourth in a five team division. And then there’s the playoffs. McGrady’s April showers have been well documented, but what the hell, let’s rehash: in 10 years, McGrady has been on six playoff teams. Every time his team has lost in the first round; he’s averaged just over 5 playoff games each season he’s made it.

The past three trips have been especially cruel. In 2003, a young T-Mac averaged 32 points a night to push his Orlando Magic into the playoffs. As an eighth seed they jumped to a 3-1 advantage over the Detroit Pistons, which would have been enough in any other season (’03 was the first year of the seven game first round series). An

ecstatic McGrady stated it was “wonderful to finally be in the second round”. Oops. The Pistons hammered the Magic three in a row, winning by 31, 15, and 15. McGrady’s stats and the Magic’s record took a slight spill the next season, and a megatrade shifted McGrady and others to Houston for the black hole known as Steve Francis. ???? ????? In 2005 Houston won the first two on the road in Dallas, but ultimately suffered a 40 point Lone Star backsmacking in Game Seven. And just last year McGrady had the optimal

situation–home Game Seven, up 5 with 6 minutes left–but Carlos Boozer and Andrei Kirilenko combined to send him packing. McGrady left in the middle of his press conference, his face matted with a few tears, his pride shaken perhaps beyond repair.

There’s a built in excuse for this team if they fail in April; two if you count Adleman’s poor playoff record (14 chances, no titles). McGrady doesn’t seem likely to accept that. ??? ???? It’s almost impossible to predict who will oppose the Rockets, but unless they win out in their next 18, they’ll be on the road, an uphill battle. Yet #1 is still looking for his first, and unlike his more famous and less likable cousin, McGrady puts in the effort. He clearly gives a damn about the team, about winning, about playing hard under pressure. Perhaps he can take solace in the success of Kevin Garnett this year, who may well break into the big time after years of underachieving in Minnesota. McGrady’s still got quite a bit of career ahead of him, but it seems important that he at least make a first step soon, or else the albatross will only grow larger and more shrill.

Once again, 10 seasons in an All-Star career will come down to seven games worth of judgment. Whither Tracy McGrady?