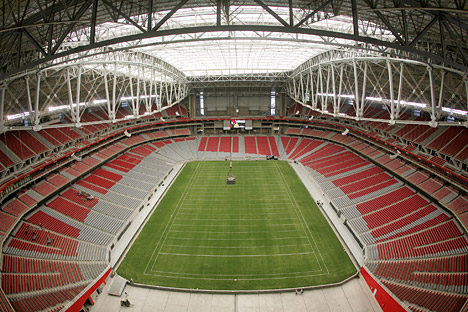 Attention P. Burress: So you made a prediction for this week’s game. Here’s the problem. In 1969, the AFL was an unproven league, and while Joe Namath’s fabled guarantee was audacious, it wasn’t *too* audacious because no one had seen the Jets play an NFL squad, ever. The Colts were a great team but not nearly as good as the Packers teams blasting the AFL in the previous two seasons. Today, everyone’s seen the Patriots slap around the NFC East, and we know damn well what heights they can reach. ???? ?????? ???? ?????? “Predicting” the unbeatens will score their lowest point total of the season is more than a little stupid. The D was keying up on you and your weak ankle already. Ask Freddie Mitchell how that works out. I guess the two week layoff was just a little long, and you got bored. Shouldn’t have pulled a Tiki.

Please, please just call the football game. No guests, no cartoon pigskin teaching the kids what an I formation is, no Taco Bell sponsored left upright, just play by play and analysis from Troy in the booth. And make Chris Myers realize what he’s done with his life. One minute he’s hosting Up Close and inventing “Did You Know”, the next he’s sucking up to the California Raisins at a 49ers-Ravens tilt. Get it together, Jub Jub.

Attention R. Harrison: You play for the Patriots and therefore I begrudgingly support you. But let this be known; you are a dirty player, you took Human Growth Hormone, and you lie every time the referee blows his whistle. We all see you dive head-on into the leg of a player in a four-man pileup. We watch you turn around at the shriek of the whistle, flap your arms like grand chicken wings, bug out your eyes in disbelief, whine a, “Who, me?” sobstory. No one buys it. Knock it off.

Attention E. Manning: Ask Dan Marino, sometimes you only get one chance. Make the most of it.

Attention T. Brady: You are one of the 10 greatest quarterbacks, already soaring towards the top 3 at lightning speed. This season was the greatest football performance I have ever seen. At 30, you have an MVP trophy, two

Super Bowl MVPs, and three rings on your hand. You are one of the most photographed celebrities in the United States, on your way to becoming an American Beckham. You’re on top of the world. Hear me. I swear on all that is holy that your career will never be the same after this game, win or lose. With a win, you become field general of the greatest football team of all-time and maybe professional sports history. (I’m sure the Harlem Globetrotters and ’04 Arsenal would complain a bit, but let the greats jostle.) With a loss…you will not be looked at the same. Your name will forever evoke “Yeah, but…” in bars, on radio, in books, CBS telecasts, sandlots, and any other place where fans revere or bitch about football. This game will put you, for better or worse, into NFL lore.

To the game, let’s make this part short and sweet.

The best case scenario for the Giants and worst case for New England is roughly this: the Pats sputter out on their first drive, Manning looks good and throws the ball around a bit and Bradshaw pounds home a touchdown; New England makes a big mistake either with a fumble or INT inside the red zone, Tynes hits his kicks when needed, Eli engineers a late drive to put the Giants up 6 or 7, and the Pats don’t have the horses to make a comeback. If New York wins this game, it won’t be by more than a touchdown, and they will never lead by the 12 they did at the Meadowlands this year. Dominic Hixon’s return touchdown was the only kickoff return for TD by a Giant this year, and it was the only return allowed by the Patriots. ?????? ?????? That’s an anomaly, and it won’t happen again. The Giants need to call a brutish gameplan to gash at the Pats front seven, and Plaxico Burress needs to out-muscle Asante Samuel when the Pats CB looks to gamble. They absolutely must stop Laurence Maroney and Vince Wilfork.

The best case scenario for the Patriots and worst case for New York is a 40 point blowout. ????? ???? ?????? The Pats march downfield and score, Manning is Bambi in flashbulbs, Randy Moss burns the corners time and again, Welker keeps drives going with third down plays, Bradshaw fumbles into the line, and the week off benefits the Pats’ linebacker corps and motivates Junior Seau into playing the last great game of his career. They must absolutely stop Plaxico Burress and Justin Tuck. In my mind, this scenario is actually slightly more likely than one where the Giants win. This New York team has found an extra gear, and they’re pretty good, no doubt at all. But to say they’ll do well because they are the hot team is a tad absurd. Not only have the Patriots put together a decent 18 game win streak, but almost all Super Bowl teams are “the hot team”! It’s tough to play like crap and win two straight playoff games, let alone three. The wildcard Steelers won the Super Bowl in 2006 because they had been 15-1 the previous season; that was a great team that hit a few unlucky breaks in the regular season and then popped lucky ones (like Carson Palmer’s knee or Nick Harper’s leg) in the playoffs. This Giants team does not fit that bill, and we shall see it this Sunday.

This is the 2nd installment in today’s PICKSTRAVAGANZA by the Nerds on Sports staff. Check back on the hour from 11 AM to 4 PM for more “insight” from the nerds.