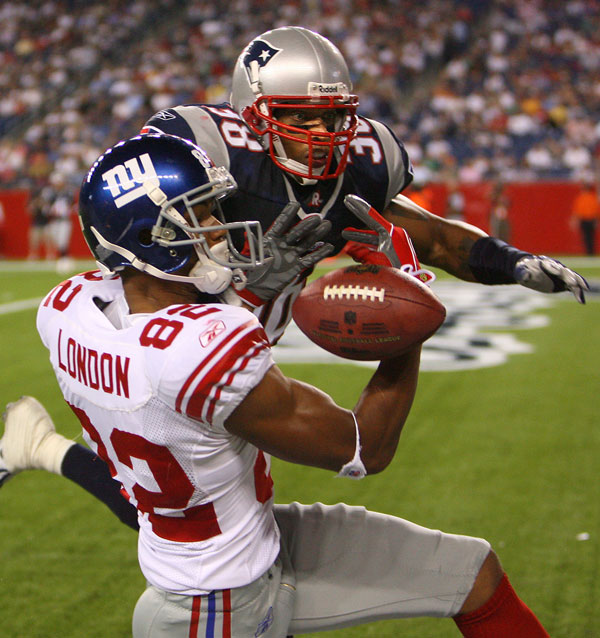 If you look below you will see today’s main article. This is the beginning of a week long Super Bowl blog between our resident Patriots fan (Sean) and Giants fan (Serpico).

So, earlier today you mentioned that you can’t see why the Patriots would possibly win by 14 points, the Vegas spread. A number of people agree with you, perhaps the reason that a bunch of New York money has pushed the line down to just 12 as we officially kick off Super Bowl week. But let’s not get too ahead of ourselves and use 14 as our jumping off point. Here are three reasons why the Giants will shrink in the Big Game.*

1) You can’t score when you’re not on the field. In the previous meeting against the Giants, the Pats amassed all of 44 yards rushing, a paltry number against a stout front four. You would think then that New England, so heavily reliant on their non-partisan blitzkrieg, would be a quick strike team then, no? Well the Patriots controlled the ball for over 36 minutes that day, limiting Eli Manning to a last-ditch comeback effort that fell short after an onside kick failed. They also held the ball for a majority of the time in playoff wins against the Jaguars and Chargers. If the Pats can keep the Giants off the field and push the ball downfield on each possession (no turnovers in that 38-35 victory), Glendale spectators will see a show that could justify the $4,300 ticket prices. Actually, no, nothing can justify those ticket prices.

2) You forget this now, but lost amidst the chaos of everyone’s underdog taking a 12 point lead over New England back in December was the Patriots’ response. The crowd roared and fans from Easton, MA to East LA crowded closer around their HD screens, but to Brady and co. this was still a practice squad drill. The Patriots proceeded to rip off 22 points in 15 minutes, a dazzling display of long bombs and shutdown D. No team has ever put up points like the AFC champs, and the likelihood of an outburst is a constant threat. The Pats are totally healthy, and the only player on the offense who hasn’t gotten going in the postseason–a Messer. Randy Moss–torched the NY DB in NJ the first time around. This can’t happen again? You sure?

3) Evidently you are not sure, because you yourself think the Pats will win, as do computer simulations and a majority of the country. If you don’t think the G-Men can win outright, why believe so seriously they can keep it close? Picture this; Patriots smash their way downfield with a 22 yard run from Maroney and a 19 yard quick screen to Welker. They score on an 8 yard touchdown pass to Randy Moss. 7-0. Giants go three and out, with Manning sailing a third down pass over the outstretched hands of Plaxico Burress. Pats get a decent return, manage two first downs, and Gostowski kicks a 42 yard field goal. 10-0. Coughlin’s screaming on the sideline, Joe Buck and Troy Aikman are saying that the Giants have just lost that mojo from the week long layover, and the Pats seem like destiny’s darlings tonight. Then, about three minutes later, Asante Samuel gambles on a quick out to Burress and plucks it away, returning the pass 34 yards. Maroney punches it in 6 plays later from 12 yards out. 17-0. You don’t think that’s possible? Mistakes get magnified in the Super Bowl, especially with underdogs. Just ask the ’91-’93 Bills, the ’94 Chargers, the ’96 Patriots (second half), the ’98 Falcons, the ’00 Giants, and the ’02 Raiders (underdogs because they kept the same names for audibles despite the fact that the guy that gave them those audibles now coached the other team). It’s a nightmare waiting to happen.

Oh, by the way, that nightmarish blowout I depicted? I just changed the names and the order of plays and scores from the 2000 NFC Title Game. Giants 41, Vikings 0. I hope you remember that game well this week.

*My guess is the NFL will soon copyright the Big Game, just as they have put a trademark on Super Bowl forbidding advertisers from capitalizing on it. By 2010 we will only be able to refer to it as “Football Match Huge!”