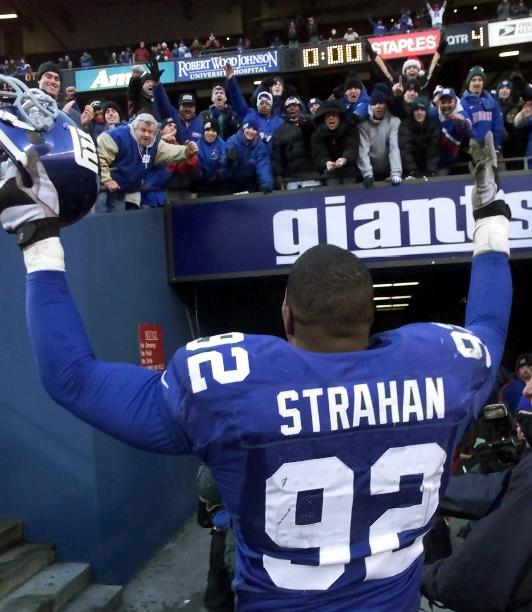 We’re not here for the Giants.

I repeat that the Bud commercials, the FOX globalcast, Tom Petty, the pomp and circumstance: none of them are here for the Giants. For all of their efforts this season, they earn the right to play a sixty minute football game. The Super Bowl is never really about football anyway, and even if it were, the pretty boys to the north would earn the acclaim. The accolades will reduce this year’s NFC Champion to the Washington Generals

It’s a bit of a shame, too. New York overcame its obstacles—three road games, a Packer defense as solid as the Lambeau Turf, playing home games in New Jersey—to earn the NFC championship, its first since 2000. As that conference’s representative, they will likely be thrashed by the New England Patriots in front of a worldwide audience on February the third. They did fight hard in a 38-35 defeat against those same Patriots the final week of the regular season, a battle most football pundits think galvanized the G-Men in their three week playoff march. Unfortunately, it took a loss to galvanize them, and a loss against the team they have to play again.

There are two ways New York could beat out the Patriots in this Super Bowl. The first is to straight-up win, which would end the Patriots’ 18-0 season with a stunning loss, perhaps the biggest upset in NFL history. This victory seems unlikely, as the Patriots are totally healthy (protective boots notwithstanding) and have lost precisely one contest in the past 13 months. The Giants have lost nine times in that same period. Additionally, New York gave up twenty-one unanswered points in a quarter’s time to these same juggernauts during their home finale. Even the Knicks don’t give up 21 in a row, and I’m pretty sure they only play four guys at a time. ???? ???? ???? ????

The Little Giants should instead concentrate on a more realistic goal: staying behind the Patriots. That’s behind on the list of the worst performances in Super Bowl history, in which the Patriots are the clearcut #1. ???? ???? ??? ??? ???? The 1985 squad and this year’s Giants have quite a few similarities, as the Boston Globe helped point out this week. Both survived three consecutive postseason road tests. Both were headed by oft-maligned QBs, shaky

. Most importantly, they face absolute juggernauts of a Super Bowl opponent; the Chicago Bears, still the most terrifying champion in NFL history, at least until New England steps on the field next Sunday.

The Giants have less chance than the defense at Nuremberg. The most positive estimates simply provide faith that they can keep it close, that the 14 point Vegas spread is too high. In other words, the Giants are the juice stain on the new sofa; at best, it doesn’t look that bad! It’s exceedingly difficult to match the Patriots point for point; just ask Chargers coach Norv Turner, whose decisions to kick field goals deep in Patriot territory and punt on the New England side with nine minutes remaining cost his team a chance to win. (In retrospect, each call should have prompted CBS to flash a “NORV TURNER IS COACHING, REMEMBER THIS” graphic on the screen.) If the Giants repeat the sort of full throttle, aggressive performance they delivered just a few weeks ago, Big Blue could catch enough breaks to send XLII down to the last II minutes. Maybe.

On January 26, 1986, the New England Patriots put together the worst performance in Super Bowl history, more inept than than the three-point-scoring 1971 Dolphins, more deer in headlights than the 1990 Broncos, more brutally shellshocked than the 1992 Bills. Richard Dent earned the MVP that day; he should have shared the award with whole opposing offense. At halftime against the 15-1 big bad Bears, the Patriots had more points (3) than yards (-19). After recovering a fumble two plays into the game, New England marched down the field zero yards, and kicked a field goal. They would not travel that far down the field for another 44 minutes. At one point, quarterback Steve Grogan stood under center for a third down and 33 yards to go. Imagine a scenario where on first and second down the quarterback sprints backwards until tackled. Third and 33 is somehow worse.

Grogan was considered more successful than starter Tony Eason. Eason “led” six drives that day before coach Raymond Berry mercifully replaced him in the second quarter. The most successful play of all those six drives combined was a three yard sweep by running back Craig James. Eason dropped back to pass nine times, completed zero of six passes, and was sacked

the other three times, fumbling one away to the Bears. It remains the worst quarterbacking since Plimpton. At least George was candid about his failings; Eason refused comment on an ESPN story this week, with a spokesperson stating “Tony doesn’t like to speak with anyone in the media, especially this time of year.” Sounds like a fun household!

On defense, the Patriots gave up 37 points (discounting the safety and interception return for touchdown), and they couldn’t even do it right, denying the great Walter Payton a score. The Bears achieved no touchdowns through the air, yet Jim McMahon passed for 256 yards. The Pats allowed two scores on QB sneaks, gave up off-tackle runs like a commuter trying to catch a taxi in the rain, watched as a 300 pound, gap toothed defensive lineman

rumbled home a sixer…this was three hours of incompetence, captured by NBC television cameras and the largest television audience (to that date) in history. The spectacle featured Up With People as the halftime entertainment; their cheery twirling was a nice diversion from Down With Patriots. Unfortunately, that show ended and soon returned the live coverage of ants burning alive under a magnifying glass.

All the Giants have to do next Sunday is avoid what’s documented above. As long as they play their hearts out and Tom Coughlin

stands on the sideline looking like he just swallowed a Tostito with sharp edges, the Giants will be fine. They might lose by four, they might lose by fourteen, they might lose by twenty. As long as they come to play, no one will really care. Giants fans are too busy sharing toasts and congratulating themselves to care. They’re elated that Big Blue rolled through the playoffs and somehow Eli Manning didn’t pee himself in the process. These people could not be more Happy To Be There; by next Thursday downtown Phoenix will look like Sopranos West. If they lose, they lose, they’re playing with house money. If the Pats season was the Miracle on Ice, New York is Finland; a tough bump at the end of the road, but a bump all the same. Someone has to be the final victim of immortality.