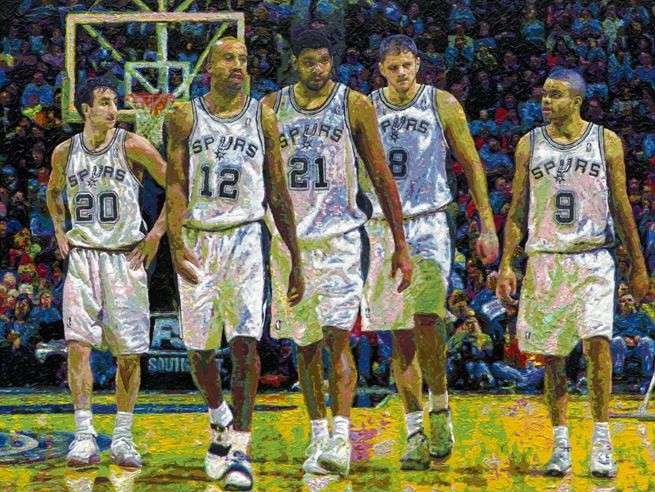 And how terrifyingly real this vision is. Ratings have sagged since ABC wrested the tv contract away from NBC. The milquetoast Spurs, “boring” despite their ability to succeed playing any style of basketball, push away viewers with alarming consistency. The slide into a hard-hitting, defensive, low-scoring league in the early 2000s forced even hardcore fans to recoil.

Allen Iverson became, for better or worse, the face of the league, a drawback to casual fans. The 2004 brawl with fans at a Pacers-Pistons game was nearly the nadir in the league’s sixty year history. In the last two years, attempts to clean up and improve the league through mandatory dress codes and synthetic basketballs fell flat. All the while, scumbag referee Tim Donaghy almost certainly fixed games for low level criminals.

Perhaps more crushing than a cluster of little problems but the absence of a big solution. The league’s fanbase ballooned in the 1980s on the backs of its stars. Larry Bird and Magic Johnson are the first to come to mind, but with a litany of other players too, from Dominique Wilkins and Kevin McHale to John Stockton and Karl Malone. Even Charles Barkley, sometimes reviled in his earlier years, was at least quotable and interesting.

And then there’s Michael. Why did he succeed on so massive a scale? With only five on a team playing at once, a basketball player can dominate to a greater degree than in other sports, and Jordan’s hardwood perfection put him at the pinnacle of 20th century athletics. Television and marketing compounded his on-court success.

Jordan’s camera friendly, easygoing, and polite yet funloving manner gave him an across the boards likability no athlete (perhaps no black man) has held before or since. (Tiger Woods comes close, but by following in Jordan’s pioneering footsteps he appears with a nagging, unshakeable corporate hollowness.)

As a result, every NBA superstar (Shaquille O’Neal, force of nature, excepted) to follow has faced unfavorable comparisons with Jordan. Jordan himself has been gone from the league for four years physically and nine years as its marquee drawing card. His psychological grip on American sport still remains astonishingly high. In a 2007 Harris Favorite Athlete Poll, Jordan placed a remarkable third, down one spot from 2006 but still unlikely to leave the top ten until at least 2010. His string as America’s favorite athlete for 13 years may never be touched again.

The pressure attached with “Next Jordan” status has torched lesser lights Harold Miner and JR Rider among countless others for 15 plus years. But it wasn’t until Jordan retired on top in 1998 that the cry became deafening. Many likely nominees have fallen short in their own ways. Vince Carter never developed the mental toughness or the Madison Avenue success. The three lasting memories of his career will be his spectacular dunking (2000 contest and Olympics), his decision to attend his UNC graduation the same day of his team’s 2001 deciding playoff game, and his tanking in Toronto to force a trade to the New Jersey Nets in 2004. All three are victories of the self.

Kobe Bryant’s savior credentials never quite lifted off. Shaquille O’Neal was Superman during their eight years in LA,

and Bryant’s inability in Shaq’s absence to move a weak supporting cast past the first round has done little to enrapture fans. Bryant’s legal troubles eroded public goodwill. His bizarre love-hate relationship with seemingly the entire Laker organization has turned his off-court name to mud and his business to sideshow. For all of Bryant’s physical gifts — and there are many, from his ability to score at will to his underrated lockdown defense — fans’ impatience to watch an athlete (especially an unloved one) become championship-level dominant stops #24 from reaching 23.

The most terrifying result for league executives is that off-season NBA news is more popular and more widely debated than the season itself. Not even Hot Stove baseball carries with it more notoriety than the games played; this inverse ratio of fan interest reduces the NBA to a fantasy sport, where drafts, trades, and free agency rumors overshadow and dwarf wins and losses. Part of this can be dismissed to a hope springs eternal philosophy, but not all.

Zoom around the league. Look again at the Lakers, one of the top three marquee franchises in the sport. Over the last four months their 2007 season has revolved around Bryant’s intriguingly crazy parry and thrust with Jerry Buss. Will he go? Will he stay? Chicago, Phoenix, the Knicks? In all likelihood, Bryant has no real hope of going anywhere with his max contract. “Equal value” on a trade would be impossible. And yet the media (and indeed some overeager LA fans if there are such a thing) have elevated Kobe’s every word to a proclamation, every action to Mussolini proportions. Why? No one wants to face facts: Bryant will suit up and play for the Lakers this year, there will be between 40 and 48 wins, and the Lakers will head no further than Round 2 in the West. It’s too predictable.

How about the Cavaliers? The Spurs decimated Cleveland in the NBA Finals and the green Cavaliers retooled by adding no one of value. Yet they are the team to beat in the Eastern Conference. The East-West disparity 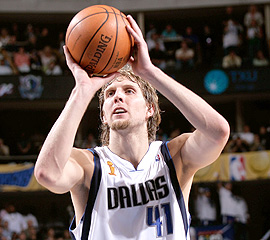 remains a wide chasm; even the top two sure thing draft picks went to the Pacific Division. The competitive imbalance continues to hurt the East much like it did out West ten years ago. Just as few truly thought their team could upend the mighty Bulls in the 1990s, the EC’s beaten down fan bases resign themselves each November for an 8 month ride straight into a brick wall. Only the Pistons’ mighty upset of the vaunted Lakers in 2004 gave a brief respite. That goodwill eroded in the wake of November’s Malice at the Palace brawl.

So what’s to be done here? There are two possibilities on the horizon. One is this year’s Celtics team. A marquee franchise suddenly re-energized by the arrival of a legitimate superstar and a 7 time All Star is on paper worthy of beating the West’s best. Boston still stands as the place where the NBA reached its peak in the national interest (Game Seven, 1984 NBA Finals), and a successful franchise there stands to rejuvenate the league. But with the Patriots’ dominance, Boston might not even notice its NBA team until mid-February; if that happens, when will the rest of the country? All the league’s eggs should not be in the Garden’s basket.

And then there’s LeBron. Sure the Cavaliers were absolutely humbled on the game’s biggest stage. That’s okay; the MJ Bulls took seven years to reach the podium, and LeBron’s put his team in position after just four. And certainly it’s dubious that he signed a $90 million contract with Nike before stepping onto a professional court. But his skills as a worldwide genial pitchman are improving (and some of his commercials are fantastic). The goal appears to be to make King James the brand outshine the player or the man. Lest we forget, however, Jordan did much the same. Anyone remember his “Republicans buy sneakers too” comments in the 1990 Senate race? Civil rights enemy Jesse Helms fought off a stiff challenge from Harvey Gantt due in part to Jordan’s refusal to stump in his home state.

Whether the public turns out in droves to witness King James’s coronation is the billion dollar question. He’s the third potential next Jordan, with an added advantage–the majority of the public is quite comfortable with him simply as the first LeBron. That sits fine with Michael Jordan as well. He shined over his peers in his playing days; now he threatens to envelop the next generation in his massive shadow.