[Business Day One] Matters of Importance

There’s a lot going on, and since it is Monday, I must explain it all.  Let’s feast on knowledge.

-The Gods of Sport heeded my prayers, and now a 17th banner will hang from the rafters of the New Boston Garden.  Kevin Garnett is no longer a choke artist, Ray Allen’s ankles are more durable than some thought, Paul Pierce displayed tremendous truthiness, and Rajon Rondo was a one-man fantasy team.  I am a big fan of people (or teams) that realize their potential.  Not that I’m a fan of pundits getting proven right or anything, but I derive a lot of satisfaction when a group that is considered great to fulfill their greatness.  The Celtics, after reeling off 66 wins during the regular season, did everything asked of them in the Finals, and the results were clear.

-Jason Giambi’s moustache is disturbing me more than I thought facial hair could. 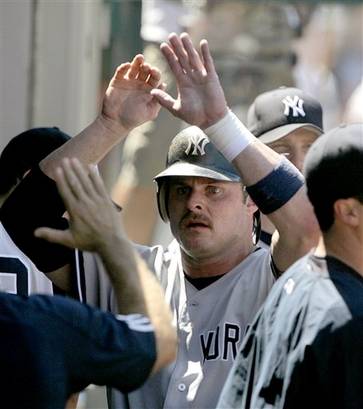 I think it’s because the man is always sweaty.  There’s just something about sweat beading up and rolling down a moustache that makes me think of 70s pornography.  And I don’t care to think about such things when I’m watching baseball.  I find myself rooting against Giambi hitting a homerun, because then I’d be subjected to a close-up of his damp, hirsute face and he trots around the bases.  Truly, it is something that haunts my dreams.

-One of the joys of living in a big city is being able to follow the Euro 2008 based solely off of the facial expressions of various ethnic groups.

-When you’re arrested that often, people can call you whatever they want.

-The New York Giants, as they seem to every year, are embroiled in offseason controversy.  There are contract disputes, a jailed running back and a retired sack leader.  It feels like I’ve spent every year for the past decade lamenting at how dysfuntional the team I grew up with has been.  But every so often, I get a nice story about a 3,000 mile charity walk.  That keeps me holding on.