I took in the Red Sox/Orioles game this Saturday, and the experience so dominated my weekend that I must write about it today. Like at all Sox home games, the area around the ballpark was packed with fans wearing Papelbon and Ortiz jerseys and Boston hats of 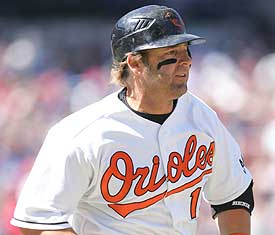 various colors. Kids in oversized red shirts jogged around to avoid their parents, who were yelling after them in every accent from North Shore to Southie. Folks carried bags of souvenirs, gorged on pretzels and drank $2 bottles of water. Just like every other Mardi Gras-esque pregame party on Lansdowne Street.

Only we were about 400 miles away from Lansdowne Street. At Camden Yards. At which the Sox were playing an away game. Could’ve fooled me. Considering the ratio of Sox to Orioles fans both on the streets of Baltimore’s Inner Harbor (10 to 1) and the ratio inside the stadium (let’s say, conservatively 4 to 1), you’d think Baltimore was a stop on the Ashmont-Mattapan High Speed Line. Might as well have been, really. The City of Baltimore makes it very, very easy for a Bostonian to come down and have a great weekend.

If you have never seen a game at Camden Yards, you owe it to yourself to do so. In fact, make a weekend out of it, as I did. Here’s a good itinerary for a Saturday game:

Friday – Take an afternoon or evening Amtrak down to Baltimore’s Penn Station. It’s a surprisingly manageable 7 hours from Boston or 3 hours from New York City. Baltimore has this interesting city planning model in which they put as much cool stuff as possible in one area (the Inner Harbor) and built a train station a two mile cab ride away. Check into your hotel and get some rest.

Saturday – Take in the magnificence of the museums (of both the floating and stationary variety), shops and restaurants and revel in the (if you’re a Sox or Yankees fan) camaraderie of seeing nothing but your fans wander the area. For me, that was truly the most shocking part. I knew that the Boston and New York fans traveled very well to Baltimore, but I could count on one hand the number of merch-wearing O’s fans seen at any given point walking the admittedly touristy Inner Harbor before the game. Great atmosphere, and worth seeing for a few hours before the game.

The Game Itself – Get a crab cake. Perhaps you have a part of your brain that tells you not to buy fish at a stadium. Silence that part of your brain, as it is stupid. The crab cake sandwich I ate at Camden Yards was as tasty as any other really good crab cake I’ve had. And at $10, priced to own! The park is beautiful, so just take some time to soak it all in. It is new but looks storied, clean but feels earthy. Keep your ears open too – if your team plays in the AL East, the cheers are going to be the same as the ones back home, only at about 80% volume (that 4 to 1 ratio from before). And just enjoy yourself there. It’s as beautiful a patch of green you’ll ever see.

Sunday – Get back on the train, but make sure to bring your own food. Baltimore’s Penn Station does not have an abundance of meal options.

Stick to an itinerary like that and you should have a good time. The Orioles are a fairly classy bunch and their fans are as welcoming as one could hope for. And until they get a non-Bedard starter that can record outs, odds are you’ll see a win there!